There is a surprising amount of people following an all-meat diet. Nothing else. All meat, all the time. This is The Carnivore Diet.

I first heard of this meat only diet on a TV show, an entire family that only ate meat. At the time, I thought they were an anomaly, kind of like those people that like to eat glass or other equally unpalatable objects.

Apparently, I was wrong.

With the popularity of the ketogenic diet on the rise, it seems many are willing to take the next step and consume only meat. This is known as zero carb diet. Could this be the next big dietary trend?

The Zero Carb support group I joined on Facebook has close to 6,500 members. Another public forum has nearly 13,000 followers. YouTube videos on the topic are in the 100s of thousands.

One group even have their very own carnivore clothing apparel. The need for people to advertise their dietary choices via clothing and stickers is equal as perplexing as an all-meat diet. Perhaps some ‘well-balanced diet’ T-shirts are in order.

The question is what kind of health consequences does a zero carb diet have?

It appears there is one scientific study on zero carb. One study, with two guys, from 1930.

These two guys ate nothing but meat for 12 months. The result? Nothing really, no negative results were reported and both seemed to be in a similar condition to when they started.

Which raises some interesting questions. Is fibre essential? Are plants necessary to achieve optimal vitamin and mineral requirements? 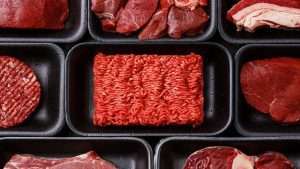 There are varying degrees to which one can follow a zero-carb diet.

The ‘eat meat, drink water’ variation is just straight-up steak and water. This is the strict zero carb diet, seafood, poultry, meat and eggs, salt and animal fats for cooking may also be included.

Others are slightly more lenient and include cheeses, full-fat dairy and plant oils.

Spices and mustards may also be allowed but discouraged somewhat.

Anything else is off limits – this includes sugar-free sweeteners and protein powders.

There is no optimal protein to fat ratio or calorie counting, you just eat until you are full.

A sample Meal plan – taken from a zero carb blog – looks something like this:

Or from a zero carb veteran, who says she eats the same thing every day

What Is the Rationale for a Zero Carb Diet? 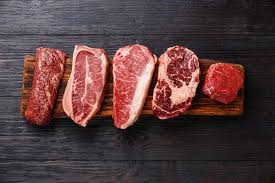 Advocates for zero carb claim that many of our ancestors such as the Inuit and Maasi, existed solely on animal products. While these indigenous communities do eat a predominantly meat-based diet, they also eat plants when they are available. Populations subsisting on a meat-centric diet in the past would have been the minority.

Our ancestors would have eaten vastly different diets depending on the region they resided. Much like today’s regional cuisine. Additionally, it is not known how healthy these populations actually were.

The zero carb mantra is ‘meat heals’, what it heals is less clear, some of the claimed health benefits include:

Aside from anecdotal (personal) reports, there is no evidence to support any of these claims.

Weight loss and better health are frequently reported by followers. Possibly explained by the satiating effects of protein and fat, leading to an overall reduction in calorie intake.

This can also be combined with the fact that there are so few food choices available on the diet in comparison to other dietary patterns. Fewer food choices makes it more difficult to overconsume calories.

Many health benefits are associated with weight loss. The result could be the remission of some chronic disease. This can also be achieved by following other dietary patterns.

How does a zero carb, zero fibre diet affect digestive health and the gut microbiome (bacteria in the gut)?

Zero Carber’s claim in the absence of carbohydrates, fibre is unnecessary.

For long term management, followers of the diet advise to increase fat consumption if constipated. Conversely they increase lean meats if diarrhea is a problem.

For the most part bowel movements appear not to be an issue. Followers are able to maintain this way of eating without severe constipation.

So how essential is fibre?

The benefits of fibre for digestive health are well documented and I have written about this elsewhere.

We know that gut bacteria thrive on fibre, and a healthy microbiome can potentially lead to health benefits in other parts of the body. Diet can affect the diversity of gut bacteria. What changes would occur and the health outcomes associated with long term absence of fibre is unknown.

In one small study, 10 healthy participants were put on a low residue (a form of very low fibre) diet for 7 days. They found that although participants pooped 70% less, the bacterial composition of their poop did not appear to be affected. However, as this was such a short time frame, the results do not predict long term effects.

Another study of 63 participants, suffering from constipation, went on a no fibre diet for 2 weeks. After this, the participants choose to remain no fibre, increase to low fibre or opt to go back to a high fibre diet.

After 6 months, 41 participants choose to remain on a no fibre diet. They had a statistically significant reduction in symptoms of constipation, bleeding, bloating, straining and pain. The low and high fibre groups did not.

This study had no control group and no placebo comparison. It is also possible these symptoms would be reduced on a low FODMAP diet.

Let’s go back to the rationale that our ancestors survived on a diet similar to the Inuit populations.

It appears the Inuit value regular bowel habits, and perhaps even feared constipation.

The gut microbiome of a remote Inuit community was compared to that of people living in a nearby city. Surprisingly only subtle differences were found between the two. When the microbiome of other hunter-gathers communities, with high fibre diets were studied, significantly greater diversity in gut flora was found.

In a nutshell: The outcome of an all-meat diet on digestive health is not understood. Aside from anecdotal accounts, there is a distinct lack of evidence in this area. It would not be advisable to completely eliminate fibre from the diet as long-term effects are unknown.

What About Vitamins and Minerals?

Can you get all the vitamins and minerals you need from meat alone?

Zero carb followers argue that the recommended intakes for vitamins and minerals are not applicable when eating this way. There are no studies proving this is the case This is potentially dangerous advice, especially for women of childbearing age.

Vitamin C intake is a major concern. The types of meats eaten in the traditional Inuit diet are quite high in vitamin C, explaining the absence of deficiency. These meats are rare (roast narwhal anyone?) and not typically consumed by the rest of the population.

A minimum intake of 10mg per day is recommended to prevent scurvy (deficiency). If consuming organ meats, you may get this amount of vitamin C but it is unlikely you would reach the recommended daily intake.

It is curious though how long somebody could go on the Carnivore Diet without organ meats and whether issues such as scurvy would arise.

Unless dairy is included in the diet calcium would also be a concern. If you ate 1kg of lean beef you would get roughly 45mg of calcium, which is only a fraction of the recommended 1000mg per day.

Folate is another concern, as it is only present in significant amounts in organ meats such as liver.

The diet would also be depleted of many healthful compounds such as polyphenols and antioxidants – the effect of this low intake is undetermined.

For other vitamins and mineral, providing organ meats were also being consumed, they would unlikely to be an issue.

In a nutshell: It would be difficult to consume optimal amounts of vitamins and minerals eating only muscle meats. Dairy and organ meat may provide extra nutrients. Vitamin C levels probably do not meet RDI, however, scurvy is unlikely. Folate intake is definitely a concern and deficiency may occur.

Is a Zero Carb Diet Safe? This is precisely the issue with zero carbs, the long-term health effects are largely unknown.

There are many anecdotal accounts of people following zero carb for years, with no adverse health effects. Many followers report being in optimal health. Perhaps it works for some, however not recommended for the majority of people.

There is also potentially damaging and questionable health advice is given in these circles. Due to the lack of evidence, most of the advice is based on opinion.

No need to exercise: Some groups advise not to exercise even though exercise has clear health benefits.

Children and zero carb: The most concerning is children are following this diet, the effects on physical and mental growth and development are unknown. Therefore, this diet is most certainly not suitable for children.

Hopefully, we see some research on zero carb in the not too distant future, especially the effects on digestive health and the microbiome.

In the meantime, I will remain fascinated by the enigma that is zero carb.

Nutrition for Hashimoto’s Disease: Things You Need to Know
What RED-S is and How to Manage It
What Is Taurine and What Does It Do? Everything You Need To Know
CategoriesHealth
Share
FacebookTwitterLinkedInPinterestStumbleuponEmail

Eleise studied a Master of Human Nutrition at Deakin University and has a background in Health Science (Paramedics). Now a freelance nutritionist and nutrition writer Eleise is passionate about communicating evidence based health and nutrition advice and has a particular interest in maternal and childhood health.