Caffeine can be found in a huge range of commonly consumed beverages and foods, and it’s no secret that it delivers an energy hit. Not as common knowledge, however, is the way it can literally improve athletic performance.

Caffeine is derived from a range of nuts, seeds and leaves and acts as an adenosine receptor antagonist throughout the body. It increases the production of adrenaline, pushing your body into that “fight or flight” mode.

Over the years, caffeine has been shown to enhance athletic performance, with the bulk of these benefits thought to be due to its effect on the central nervous system, particularly, the reduced perception of effort and enhanced motor unit recruitment.

Caffeine’s efficacy as an ergogenic aid is widely recognised and has been observed in a range of modalities, including BOTH endurance and power based activities.

Studies have provided varying results when it comes to defining what is an effective dose to improve performance and there is definitely variation amongst individuals.

The current consensus is that as a broad range, 3-6mg/kg of body-weight is the gold standard for performance.

This should be timed 30-60 minutes before the event. If using something that is more quickly absorbed, like caffeinated gum, then this range should be reduced to 15-30 minutes.

Endurance athletes can often find benefits at throughout that range, and sometimes even slightly lower. There can also be benefits for endurance athletes utilising small dosages such as 1-3mg/kg later on in races as well, rather than just before the start.

Strength and power athletes often benefit more from quite high dosages such as 5-6mg/kg of body weight.

For a lot of people, this is a large amount and it would be recommended to be cautious with this high a dosage if you have not previously had anywhere near that amount. And if this amount causing any detriments to your performance (e.g. GI distress) than the cons likely outweigh the pros, regardless of the outcomes in the research.

Higher doses than this typically do not provide any further improvement. In some cases, they may even result in poorer performance than lower doses.

Essentially, you should aim to find the dosage that is most effective for you personally, while minimising their risk of negative side effects such as increased heart rate, tremors, GI symptoms and headaches. Can You Just Drink Coffee?

For caffeine it is a tricky one though.

One aspect of complexity is the volume that could be required to reach the required amount.

Based on this, if you were 80kg and aiming for 5mg/kg, that would require 400mg caffeine. This would be the equivalent of roughly 4 coffees.

So if you drank regular coffees, that would be a lot of liquid to consume. Alternatively, if you only had one coffee, you would be be having a sub-optimal amount of caffeine.

But to add more complexity, the caffeine content of coffee is extremeley variable.

One study from the Gold Coast identified that an espresso from different coffee shops could range from 25-214mg of caffeine. That is insane.

You CAN use coffee, it just would lack a level of preciseness. How Does Caffeine Help?

One hypothesis that has been discussed is that the performance benefits from caffeine might be because of increased fatty acid utlisation during exercise.

If caffeine could increase fat utilisation during exercise, it would allow glycogen to be used at a lower rate and spared for later in events. This was hypothesised to be the mechanism by which endurance activities were improved.

By the mid-1990s though, it became clear that this mechanism was not the explanation for improved performance. The fat-mobilising and glycogen-sparing effects are not consistent in the research. Even in people who do respond to caffeine by releasing more fat into the blood, the effect appears to be non-existent after 10-15 minutes.

Performance increases are also seen in both responders and non-responders to caffeine-stimulated fat release. Caffeine is also beneficial for shorter performances that are not limited by glycogen, which would not be explainable by this mechanism either.

More likely, the majorty of the benefits benefits from caffeine occur due to antagonistic interactions with adenosine receptors in the central and peripheral nervous systems.

At a minimum this can reduce the perceived level of effort that is occuring during exercise. Obviously this can allow people to push harder.

Beyond that the reductions in perceived effort, caffeine can also directly increase central drive in the central nervous system which can explain some of the direct performance improvements.

One example of this is that it can improve muscle contractions via the release of calcium within the cell which explains improvements in things like lifting, sprinting and verticla jump performance.

The topic of caffeine tolerance is pretty complex though. At this stage, the research seems mixed. But the current consensus seems to be that: 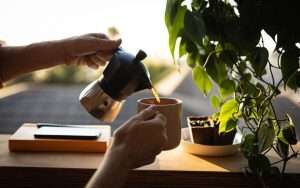 While there are a lot of benefits to caffeine, there are also some downsides too.

The most commonly cited downside is the impact on sleep.

Once ingested, caffeine is slowly metabolised or degraded in the liver with a half-life of 3.5-5 hours.  That means that half the original caffeine remains in the blood after 3.5-5 hours. And then in the next 3.5-5 hours, only 25% of the original amount is left, and so forth. So there can still be trace amounts 24 hours after ingestion.

There is a lot of individual variation with this though. But this knowledge is useful to have since a lot of people think caffeine will be out of their system completely by the time they go to sleep.

A good rule of thumb is to avoid large amounts caffeine after 12pm. But this can be tricky to balance. For example, what if you have an event late in the evening? Sometimes it makes sense to make the tradeoff, for better performance. But for training on a consistent basis, the benefits of quality sleep outweigh the benefits of caffeine.

The other two main downsides are gastrointestinal distress and anxiety/jitters associated with caffeine.

Gastrointestinal distress is pretty individual. But if caffeine provides a 1-3% performance boost, that can be outweighed by performance loss assocaited with GI symptoms.

Anxiety and jitters also could outweigh the performance boost.

In some cases it could make sense either not to utilise caffeine, or use the lowest effective dose.

While caffeine is commonly utilised, it still is relatively underrated.

The reason it is underrated though is because people are often not particularly strategic with their timing or dosages. And it also is not necessarily common knowledge that it can directly improve performance beyond simply reducing perceived effort.