Carbohydrate loading is a nutrition technique used by athletes in an attempt to prolong optimal athletic performance and delay the onset of fatigue, or, ‘hitting a wall’. It is also referred to as carb-loading, or carbo-loading.

Transforming Carbs in Food to Energy for Muscles

Throughout digestion, carbohydrate-containing foods are broken down into simple sugars such as glucose. These sugars are then absorbed into the bloodstream. Insulin is secreted by the pancreas which enables uptake of glucose from the blood by our liver and muscle cells. Following this it is stored as potential energy in the form of glycogen.

Your muscles are basically fuel tanks for glycogen. Carb-loading if done right, essentially allows you to store the maximum possible amount of glycogen or “fuel” for later use.

Successful carb-loading puts the muscle into a state of ‘supercompensation.’ You can hold up to twice the normal resting level of stored muscle glycogen in this state.

From this stored form, the body can transform glycogen back into glucose for energy. This is through a process known as glycolysis.

Carbohydrate loading is beneficial for athletes competing in endurance events such as triathlon, cycling, and distance running where sustained efforts for long periods burn through muscle glycogen.

However, it is not only endurance sports that can benefit from a high carbohydrate intake in the lead up to an event. This is particularly true if there has been a recent training session. Or if there are multiple events within a short time frame. An example of this is playing multiple games in a day.

Energy production during brief sprints is derived from the breakdown of muscle glycogen. This is relevant for sports like soccer and rugby.

Carb-loading is also utilised by some bodybuilders in order to appear their ‘most muscular’ on stage. Extra glycogen and water that is stored in the muscle from carb-loading increases the visual appeal and size of their muscles for competition.

How to Do It

It used to be believed that you had to first go through a depletion phase. This involved deplete your muscles of glycogen to take advantage of their compensatory carbohydrate loading effects. Recent research has shown that this step is not necessary.

Current best practice for carbohydrate load can be simplified to:

Increase carbohydrate intake to 10–12 grams of carbohydrate per kg of body mass per day. Do this for 36–48 hr leading up to the event. This will saturate your muscles with a maximal amount of glycogen.

Reduce training in days leading up to the event to ensure muscle glycogen is not being depleted. Complete rest is often advised the day before the competition. 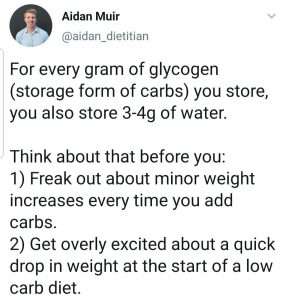 Consuming so much carbohydrate can be difficult, so it is worth considering where these carbs are coming from.

Carb-loading is often done in conjunction with a low residue (i.e. a low fibre) diet. Utilising a lower fibre intake can help in multiple ways:

Suitable foods include easily digestible carbohydrates that are lower in fibre, palatable to the person eating them, and that are unlikely to cause stomach upset. Foods that would not often be recommended in a healthy diet such as sugary liquids and high GI foods can be useful when carb loading. It is important to note that foods, especially when eating large volumes such as with carb-loading, can have differing effects on the body. It is therefore important that you trial foods before the event, like a ‘training run.’ Unforeseen gastrointestinal disturbances are less likely to occur if you do this.

High fibre foods like grain bread, wholemeal pasta, brown rice, and large amounts of fruit, can cause gastrointestinal upset including constipation or diarrhoea, flatulence, and bloating. These are all very uncomfortable sensations, particularly during vigorous exercise. Obviously, they should be avoided where possible.

Trying to carb-load without a plan can make it difficult to consume enough carbohydrates to optimise performance.

For example, a 70kg athlete consuming 3g/kg/day might increase to double their carb intake to “carb load” and eat 420g of carbohydrates. Without a plan, this is still well under the 10-12g that is recommended. It would not be enough to maximise performance.

This can occur if you are consuming higher fat or higher fibre carbohydrate sources. It could lead to getting full too quickly. Or it could involve simply lacking awareness of how much carbohydrate is actually required. Keep fat intake low, and protein intake moderate.

Do some simple planning to ensure that sufficient carbohydrate intake is met.

It is important to remember that carb-loading is not meant to represent a healthy diet. It is a functional method of temporarily enhancing performance. Foods that may be recommended on a carb-loading plan are definitely outside of normal dietary recommendations.

With that being said, a daily breakdown may look like this: When NOT to Carb-Load

Carbohydrate loading is typically only useful for events that place a high demand on the body for a sustained time, or for repeated intense bouts over consecutive days when glycogen depletion becomes a limiting factor.

It is not necessary for your Sunday 4km jog, your weekly touch footy game, nor every causal gym session you do. These sorts of events will benefit from having carbohydrate in your diet in general. But they don’t need to be ‘loaded’ for.

Carbohydrate loading can be an effective way for endurance athletes to significantly improve their performance.

Often when people try to implement it without planning, they fall significantly short of the optimal amount of carbohydrates.

To do it properly, you could use the information in this post. Or you could consult with a sports dietitian who can create an effective plan for you.

It is worth taking seriously since it can make a pretty big difference in results.

Tyler has a Bachelor of Nutrition and Exercise Sciences and completed his Masters of Dietetics through the University of Queensland after moving away from a long career in the fitness industry. As part of his education he worked with dietitians at the Brisbane Broncos rugby league club, is currently working with the Qld Women's Rugby 7's team, and has continued to follow his passion for performance nutrition. Tyler is a believer in 'practice what you preach'. Outside of helping people achieve their goals through diet and exercise, he competes in powerlifting and loves experimenting with his own nutrition and diet to find the best ways to support various training and body composition goals.