For a long time, it has been known that there is some form of dietary link with depression. It doesn’t take a genius to look around and notice that people with depression often don’t have the best diets. Although obviously there are exceptions.

But that brings up a chicken or the egg situation. Do they have poor diets because of the depression leading them to care less about their diets? Or is their poor diet one of the key factors in their depression? I believe it is likely a combination of both.

Having worked with quite a lot of people with severe depression, I can clearly see that there are a lot of times where they throw any care in the world about good nutrition out the window, no matter how dedicated they are at other times.

Often a short phase in a single day or two is enough to reverse the progress that they made over the rest of the week.

At the other end of the spectrum, I have noticed that when they improve their diets, they appear to be at a much lower risk of these “episodes” getting the better of them – however, this is only anecdotal.

Honestly, there isn’t much research regarding actual nutritional interventions. Prior to a recent study called The SMILES Trial, there actually were not any randomised controlled trials on the topic/ That is is crazy. 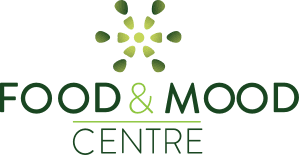 This was the study that piqued my interest in the topic. Before this, there was a clear observational link that was backed by research to a certain degree, but there were no actual interventions that had been shown to improve symptoms.

The SMILES trial resulted in a massive reduction in depression symptoms, which obviously is something worth paying attention to.

The Smiles Trial was a 12-week study that included 66 people, after 99 were excluded for factors such as changing anti-depressant medication and other variables. Everybody included was classified as having severe depression. Most participants also had severe anxiety.

The number of participants was much smaller than desired. But that doesn’t make the study worth disregarding. The authors even thought the results wouldn’t be able to reach statistical significance due to the smaller sample size. Fortunately the results were so large it is still relevant.

Arguably 12-weeks isn’t really a long enough time to measure dietary behaviour changes, since often people revert to old habits over the long term. From another perspective though, it also shows that it only took 12 weeks to get great results.

The social support group basically involved a one on one conversations about nothing in particular. No psychological techniques were being implemented since that would be an unwanted variable. If they could not find common ground to talk about, they would play board games.

This was to control for the fact that the intervention group got to spend 7 sessions with a dietitian.

Social interaction is extremely valuable for individuals with depression. Potentially somebody may improve their symptoms solely through interacting with a dietitian. This would hide whether it was the diet or the interaction that led to the improvement. That was why the social support control was implemented.

Exactly how to implement the diet will be detailed later in this post. The key factors were that they were very low in “unhealthy foods” and had large amounts of wholegrains, fruits, vegetables and healthy fats. One massive variable that I am extremely happy that they accounted for is weight. If somebody’s weight changes, it is likely to affect their symptoms of depression in some way.

To account for this, the diet was deliberately set up to involve exactly enough calories for people to maintain their weight.

The diets weren’t controlled tightly though. Fortunately, even though people could choose to eat how they wanted to, they ended the trial at roughly the weight they started at. This made it clear that the improvements were related to the quality of the diet, not because their weight changed.

It is also worth mentioning that because people had control of how they ate, they didn’t follow the recommended diet strictly. For example, the diet involved 60ml of olive oil, but the participants averaged ~20ml throughout the trial. To be fair though, 60ml of olive oil is ~470kcal. I can see why people might be hesitant.

Although they didn’t make all the changes recommended, they did make great strides towards the proposed diet. As another example, they also were told to keep to a maximum of 3 “discretionary” serves per week. While they didn’t get there, they reduced their original intake by a massive 21 serves per week on average. 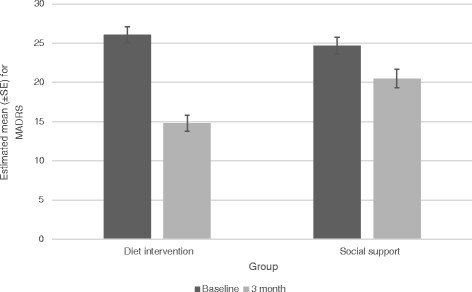 The severity of depression was based on the MADRS scale. Anything below 10 was classified as being in remission.

In the intervention group, 32.3% of people got into remission, which is incredible considering they all had major depression at the start. Everybody who completed the study had significant improvements as well.

Around 21% of people went into remission for anxiety as well. The link between anxiety and depression is quite strong.

Interestingly, 8% of people in the social support group went into remission for depression as well. This is further confirmation that social interaction plays a role.

These results are incredible no doubt, but it brings up a question to ponder: If people didn’t really come that close to following the prescribed diet, would the results have been significantly better if people followed it completely?

Regardless, it is a very “real world” trial. Which is important since the people who are going to try improving their symptoms are going to be in the real world, rather than in a lab being fed all their food. A 32% remission rate is a great statistic by itself considering diet is only one piece of the puzzle.

How to Actually Implement the Diet

This is the interesting part. I’ll lay out the diet how it is listed in the study, based on the number of servings per day. The serving sizes are based on the Eat for Health Guide. You can find the exact serving sizes in the links in the middle of that page.

The diet also involved reducing intake of ‘extras’ foods to no more than 3 serves per week. Each serve was defined as being 600kj of that food. This included things such as:

Alcohol consumption beyond 2 standard drinks per day was included within the ‘extras’ food group.

Eating only until full was another part of the process. Although the servings are listed, it is more of a ratio rather than a strict plan.

What Would I Change About the Diet?

Being honest, I have never used this diet 100% as it is laid out with any of my clients. A big reason for this is because most of the clients I see who would benefit from this, also have an interest in losing weight.

Others may disagree with me and try to take the focus off of weight. I can understand that. But I personally prefer to try to assist the client to lose weight at the same time, if that is their goal.

The diet was intentionally set-up so that people would maintain their weight, just to eliminate that variable. Since regular people trying to follow this diet outside of the trial are not research participants, there is no need for that aspect.

The first change I would make is to reduce the amount of olive oil from 60ml down to something like 10-20ml. I’m a massive fan of olive oil, but I also prioritise total calorie intake and flexible dieting.

This change alone would reduce calorie intake by >200 calories.

I would also reduce the consumption of the whole grain from 5-8 servings down to a lower target. This would be based on the individual, but likely 3-4 servings.

Potentially I would also reduce fruit and dairy very slightly as well. These changes would create a larger than desired calorie deficit if followed strictly, but that is intentional. Very few people are going to stick to 3 discretionary serves per week.

Most health-obsessed people would struggle with that, let alone somebody with less interest in healthy eating.

By reducing the calories consumed through the core food groups, it leaves a little bit more flexibility for when people overconsume calories elsewhere. Ideally this approach allows flexibility while still maintaining the desired calorie deficit for weight loss and the overall dietary pattern for positive depression outcomes.

This study is ground-breaking research in my eyes, but it is only the beginning. The sample size is relatively small, and the diet wasn’t followed closely. It leaves almost as many questions unanswered as before.

The fact that the diet was so impactful and beneficial is enough to convince me that it is worth people with clinical depression trying to give it a go. But I’m sure as more RCT’s come around we will find even better approaches than this.

With all that being said, depression is multi-factorial. I am sure there are a lot of instances where dietary changes will nothave much impact at all. So please don’t read into this too much and assume that I’m believing that this is a sure-fire way to treat depression.

As somebody who has spent a lot of time working with veterans with severe PTSD, I know for sure that this style of dietary approach is going to be less effective for some groups of people than it was in the population used in the trial.

From a practical standpoint, there is one area that I am really focused on. The big nutritional challenge for a lot of people with depression is that they can go off-track big-time when their symptoms hit them hard. There is a loss of interest in nutrition, since it is not a top priority in that state of mind.

It leads me to a big question – if they stick through this for 12-weeks and stay on track and go into remission (or at least significantly improve their symptoms) does that mean they will no longer have those phases?

This would then set it up for them to have much greater control over their diet going forward.

From another perspective though it might be overly optimistic.

My key takeaway message is that I think it is worth having a go because even though these participants didn’t stick with it 100%, they still got incredible results on average.

Glycaemic Index and Glycaemic Load: Everything You Need to Know
Is Fresh Really Best?
How to Reduce Cholesterol through Diet?
CategoriesHealth
Share
FacebookTwitterLinkedInPinterestStumbleuponEmail