Scandinavia – the land of incredible healthcare systems, more paid holiday days than anywhere else in the world and subsidised tertiary education, amongst many other qualities. With all these amazing assets, who wouldn’t be inspired by the Scandinavian lifestyle?

They must be doing something right. Recent studies have shown that the Nordic countries are home to some of the happiest people in the world.

With recent hype around diets such as the Mediterranean diet and veganism, the Nordic countries have had one of their greatest and most beautiful secrets practically pushed to the side and concealed from the global media spotlight: the Nordic diet.

What Is the Nordic Diet?

As the name suggests, the Nordic diet features foods that are native, traditional and easily sourced in Denmark, Sweden, Norway, Finland and Iceland. The Nordic Diet, also termed the New Nordic Diet, was designed in 2004. A team of researchers at the University of Copenhagen defined this new, healthier regional cuisine.

The Nordic Diet features many elements of the famous Mediterranean diet, which is known for its health benefits. These features include being primarily a plant-based diet with an added emphasis on:

Hallmarks of the Nordic Diet Fish is essential in the Nordic diet. It makes up a large portion of the meat component of the diet.

Fatty fish such as salmon, mackerel and herring are particularly emphasised.

This type of fish is rich in omega-3 polyunsaturated fatty acids which are great protectors against heart disease and stroke.

According to the guidelines of the diet, non-fish meat consumption should be lean and of high quality. Ideally it should be sourced from locally sourced from free-range livestock.

Berries are a unique and prominent aspect of the Nordic diet. Berries such as cloudberries, rose hip, lingonberries and strawberries are high in Vitamin C and antioxidants. This may reduce the risk of certain diseases and cancers. Other common fruits include orchard fruits such as apples, pears and plums.

Root vegetables are staples due to their ability to withstand the cold climate of the Nordic countries. They include:

Root vegetables are particularly high in fibre, magnesium and potassium.

Cabbage and dark leafy greens are also commonly eaten in the Nordic diet.

High-quality carbohydrates are emphasised in the Nordic diet. They have been a part of the traditional cuisine for thousands of years. Cereals made with wholegrain oats, barley and rye are an important element of the diet.

Rye bread is a Nordic staple, particularly in Denmark where it is termed Rugbrød. It is arguably one of the best grain sources of fibre available. Rye bread contains up to three times more fibre than regular white wheat bread. In addition to being a great source of fibre, rye is rich in magnesium, B vitamins, iron, zinc and antioxidants.

Small Amounts of Dairy and Eggs

Eggs and low-fat dairy are encouraged in small amounts and include regular milk, fermented milk, cheese and skyr. Skyr is a cultured dairy product from Iceland with the consistency of strained yoghurt and is often compared to Greek yoghurt.

Rapeseed oil is to the Nordic diet as olive oil is to the Mediterranean diet. It is typically referred to as canola oil in Australia.

Like olive oil, canola oil is high in heart-healthy monounsaturated fats whilst keeping it low in the saturated fats department. Canola oil also uniquely contains alpha-linolenic acid. This is a plant-based omega-3 fatty-acid similar to the omega-3 fatty acids found in fish.

Low-fat vegetable spreads and margarine with no added plant sterols are used on bread and for cooking. This is used as common replacement to butter.

Aussie Alternatives to Some Nordic Staples Following a Nordic diet is not a case of ‘following the rules’ at all times.

In Australia, we are lucky enough to have access to a variety of nutritious produce from countries around the globe, including our own!

Adapting a diet to suit your circumstances is the key to giving yourself an improved chance of eating as healthily as you can. Here are some more accessible alternatives to some potentially tricky-to-find Scandinavian staples:

Should You Try the Nordic Diet? 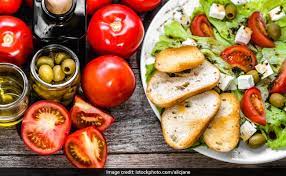 The Nordic diet has been proven to be effective in maintaining weight loss, reducing blood pressure, protecting against heart disease and stroke and reducing the overall risk of disease. These are similar outcomes to what the Mediterranean diet has to offer.

As both diets are primarily plant-based with a focus on plentiful fruits and vegetables, wholegrains, fish, lean meats and unsaturated oils and shun red meat and processed foods, it can be said that either has the ability to be just as good as the other. It also depends on where you live and the types of foods available.

For us Australians, it may be a bit hard to hunt our own wildlife and gather exotic berries. But the basic philosophy of eating local produce and producing simple, healthy meals can still be applied to your own diet no matter how or what you eat. Bonus points if you’re a fan of fish, berries and rye bread. In that case, you could already be on the right path to adopting a healthful Nordic diet!

A component of the Nordic diet often not seen or addressed in other diets is its environmental benefits. Plant-based eating produces less wastage, less pollution and uses fewer natural resources than meat-laden diets. Adopting a plant-based diet, no matter which type of diet in particular it may be, is clearly beneficial to not just the environment but to your health and wellbeing.

Is Msg Dangerous or Is It a Safe Flavour Enhancer? Everything You Need to Know
Are Artificial Sweeteners Bad for Us? An Analysis
The Lowdown on Personalised Nutrition
CategoriesHealth
Share
FacebookTwitterLinkedInPinterestStumbleuponEmail

Victoria Lekkas is a Bachelor of Applied Science/Masters of Dietetic Practice student at La Trobe University completing the second year of her four-year long journey to becoming an accredited practicing dietitian. Growing up in a Greek family, Victoria is passionate about the Mediterranean diet and issues surrounding gut health, intolerances and helping people achieve their optimal level of health. She is currently exploring all aspects of nutrition and dietetics and discovering where her skills and passions lie, and hopes to one day open her own private practice.